The River Hodder from the Higher Bridge.

The roads at this end of  Longridge Fell were still closed as they damped down the forest fires so I drove to the far end and parked near Higher Hodder Bridge. My plan was a short evening walk up to Kemple End quarry for a bit of bouldering.

I always enjoy the path through the trees above the Hodder. The spring foliage on the trees cut out some of the river views. Normally I spot herons, kingfishers and dippers on this stretch but not tonight.  But I was enjoying the way so much that I ignored the intended path that would have taken me up the fell and I continued along the river.

A mother and her two children were engrossed in the river.

The path at one point climbs away from the river and I knew of the cross in the woods on this stretch, Stonyhurst Park Cross stands above the River Hodder close to the former preparatory school, Hodder Place [now apartments]. A new cross was fixed to the ancient base in 1910, and was blessed on 12 June 1910 by the Jesuit provincial, Father Sykes; the origin of the earlier monument is unknown. 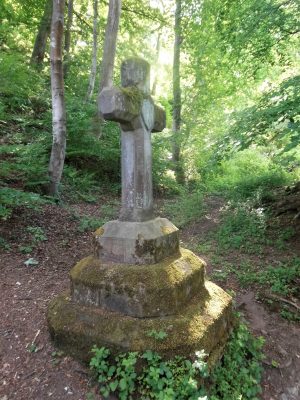 [This set me thinking – I had passed the Pinfold Cross near Stockbridge yesterday and I knew of two more crosses possibly related to Stonyhurst. Saint Paulinus’ Cross near Kemple End and Cross Gills Farm Cross near the Ribble. There is some evidence that pupils of Stonyhurst would walk between the four crosses on Palm Sunday. That seemed a ready-made walk for me to follow. But looking at the map I found another unnamed cross in the woods near SD672398 and there is a cross of uncertain age in Hurst Green. Watch this space.]

Today I noticed a faint path leading up into the woods behind the cross which I followed to some steep old steps. I climbed up these higher into the trees where I found another little path heading onwards. I imagined I would be able to cut across directly to Kemple End but at the edge of the woods were barbed wire fences and ahead unknown fields with what looked like one of those glamping developments. I did have a good view of Pendle from up here above the trees before I retreated all the way back down to the cross. 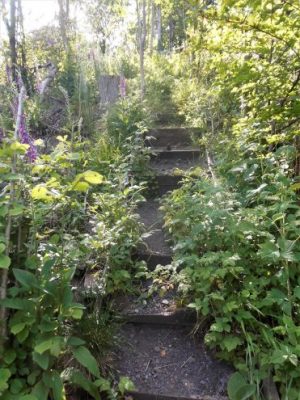 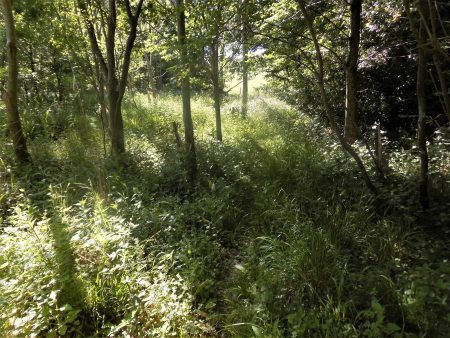 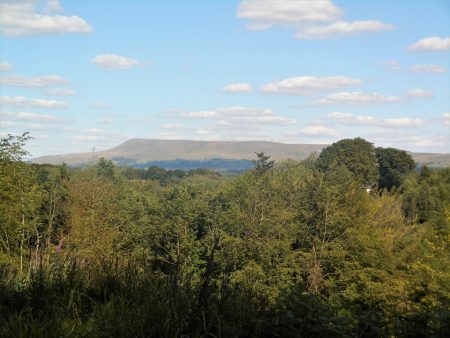 I knew the accepted footpath out of the woods up lots of steps and into fields leading to Stonyhurst, this is part of the now popular Tolkien Trail.

So I found myself on the lane around the college. It was a beautiful sunny evening and I wandered on. I became a little lost again in the fields but found my way up to Kemple End, it had taken me longer than I thought to reach here. There were the usual good views, particularly to Whalley Viaduct prominent below the Nab and the Hameldon Hills in the background. 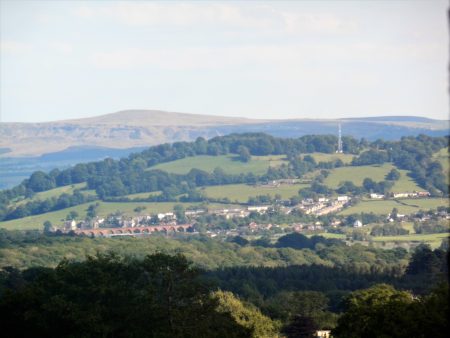 A short walk down the lane and  I was back in fields heading towards the river. Halfway down my phone rang and while I took the rather long call I found a nice grassy area in the sunshine to lie down on. Later a bit further on I was crossing the footbridge which replaced a stone clapper bridge and wanted to take a photo. I realised I’d lost my camera, probably while I’d been reclining. I  retraced my steps and then spent a good 15minutes combing the slope I’d been on before I spotted the camera. 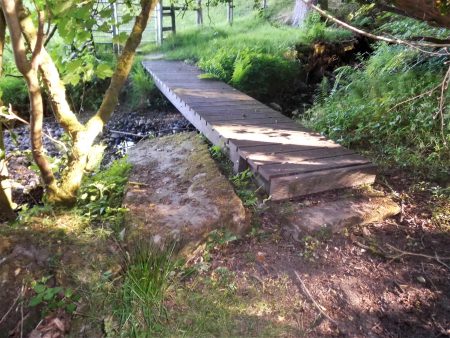 I was soon back at Higher Hodder Bridge. I hadn’t really met anyone, perfect. 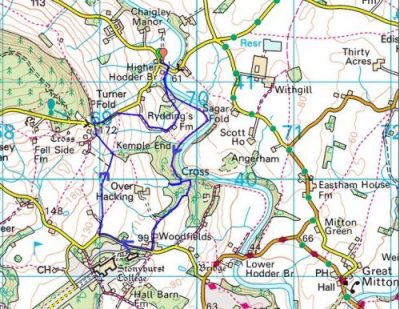 10 thoughts on “DISTRACTED IN THE WOODS.”