Having been out on the bike for a few days I’ve come to realise that despite the good exercise nothing really happens. You don’t get to chat to many people and your way is fairly delineated, little variation in terrain apart from up and down and few decisions to make. Dare I say ‘mechanical’. To make cycling more interesting I think you have to throw in some exploratory options on a longer trip – maybe more of that later in the year.

So I found myself on a bus, on a train and in a taxi to get to the start of The Irwell Sculpture Trail above Bacup in the rather bleak Pennine Hills south of Burnley. Nothing to mark the start of the trail, you might have expected some waymarking or a sculpture. Anyhow the infant River Irwell appeared and was to be my companion for two days.

Gritty moorland tracks took me down the valley with some careful and imaginative navigating. I passed one recognisable ‘sculpture’ – The Sentinel – basically a glorified cairn but incorporating some excellent dry stone craft.

Bacup was a disappointment. Lots of good back to back housing, a period decaying Bingo hall [probably an old cinema] and no cafe. 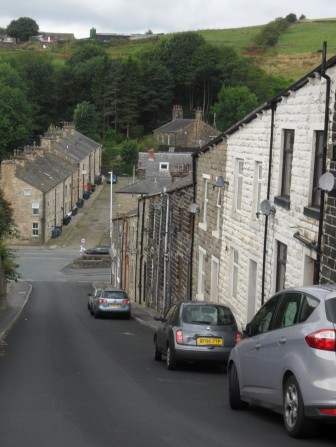 Onwards on the wrong route over Huttock Top, some scruffy walking through back streets and parks at least by the Irwell, an old railway tunnel [illegal] …. 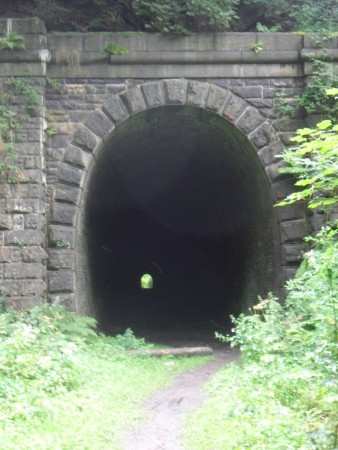 …. brought me to Waterfoot. Lots of industrial heritage, not necessarily preserved, in evidence throughout the walk. The Duke of Buccleugh provided a sit down, a half pint of Moorhouse’s Pride of Pendle with an illicit sandwich. Located another old railway track, no help from any waymarking which took me past a strange cave like structure without realising it was Spaces 9.XXXV’94 – ‘exploring the depths of the human-psyche and our relation to mystic natural forces’.

Have I lost you there?

Coming back to the Irwell, now more of a river despite being hemmed in with urbanisation, a man was fishing for trout. A good sign that things have been cleaned up.

More importantly there was a great little cafe tucked away in Lambert’s Mill, ‘cotton was king’ don’t forget in Lancashire. Have to give a shout for the very friendly Annie Peaches Tea Room! More old mills in Rawtenstall have been converted into flats and in one innovative case a Primary Care Medical facility. The  cricket team were losing to local rivals ‘Rammy’ in the competitive Lancashire League as I walked past.

A bit of dalliance at the East Lancs Railway followed to view the LMS ‘Crab’ steam locomotive 13065,

Once out of town there was some lovely countryside walking towards Ramsbottom. Passed a sculpture or two, the most impressive was In the picture framing the riverside fields.

Through an industrial estate, they are never far away, and into ‘Rammy’ my attention was drawn to an apiarist calmly trying to get an unwanted swarm of bees from a fence into a box.

By the Irwell bridge I was fascinated by the next sculpture called The River, an 88m stainless steel path meandering through a park with inspirational quotations inscribed into it. 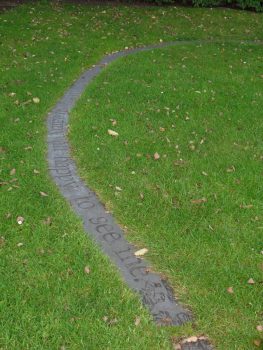 The next installation was the Vase directly in front of my lodgings for the evening.

The pub bar was full of the local alcoholics when I arrived but I must say the room was perfectly comfortable and peaceful. Anybody who knows Ramsbottom will realise the extravaganza of eating establishments at your disposal. So I enjoyed a Thai meal at The Spice Garden.

In summary a good and enjoyable 13mile walk through varied scenery, poorly way marked [didn’t see a IST sign till the last couple of miles] and not really incorporating many of the sculptures in the valley.  Tomorrows second stage?

2 thoughts on “IRWELL VALLEY TRAIL. 1. WITH OR WITHOUT SCULPTURES.”