Getting out of Corralejo seemed complicated, bits of waste land, a deserted failed development with nothing built but roads, signs and lighting and eventually a dirt track heading into the hills. The GR131 waymarking was now frequent making me think I’d come the wrong way at the start.

Looking back to Corralejo and Isla Lobos.

The way to Lajares crosses a vast area of lava known as Malpais of Bayuyo – badlands – between volcanic cones. There were a few habitations with a few goats. A natural gas cave was seen on the right and was bizarrely being visited by a man wearing a thong accompanied by a normally dressed lady, I kept a safe distance.

On the left was a caldera on the flanks of Bayuyo, ahead however was a more prominent volcano,  Calderon Hondo 248m, and this became my objective despite being off route – it was asking to be climbed. A track led to it and a steep ascent reached the crater which provided a pleasant circuit. This seemed a popular venue, a land rover track giving easy access for tours, and lots of people were taking selfies against the 100m crater. The ash cone showed fantastic laval bandings. The rocks provided some footing for low plants and mountain goats were running around up here. Extensive views over the malpias below with occasional old enclosed agricultural areas with Corralejo and Lobos Isla behind and Lanzarote just across the channel. People were bending over taking pictures of the hungry and cheeky Barbary Ground Squirrels. This species was introduced from Africa, only a 100k to the east, in 1965 [why?] and has proved a good source of food for the frequent Buzzards.   Ravens were flying past in raucous cry. At the back of my mind was the film of Mt. Etna erupting last week, but surely this volcano is completely dormant…? 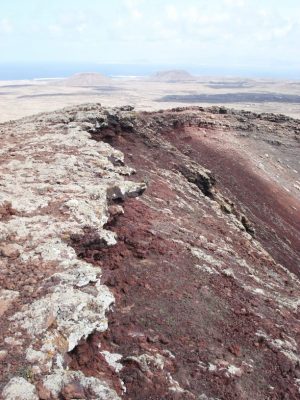 I dropped out of the wind for a lunch of bread and tomatoes, don’t these fresh local tomatoes taste great. A camel train passed me carrying tourists and further down the mountain I came across their base. My path was well constructed through the lava fields to make easy walking and soon I was heading down a track into Lajares and rejoining the GR131. A cafe was open and served good coffee, while I was there it was inundated by a posse of 4×4’s depositing tourists on an adventure trip. Time to find my little bus stop for the number 8 guagua back to town.

Hint – I’m glad I searched out the Kompass 1:50,000 map to replace the Discovery 1:100,000 which would have been inadequate for navigating. The signage and waymarking however are superb.