Across the road from the bus stop was a surfing shop highlighting the need to clean up our beaches, complete with a striking installation being made up of beach detritus. Lajares despite being well inland seems to have become a surfing centre with lots of related shops and schools. 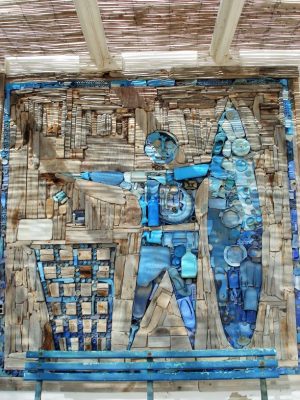 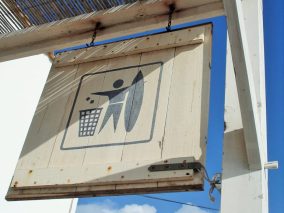 Picking up the GR markings I followed a tarmac lane out of town passing housing, this became a dirt track passing more scattered modern properties with cactus gardens, then became a narrower path running between walls reminiscent of The Dales. Abandoned fields still had the occasional fig tree growing inside its own protective wall. There were clumps of wheat scattered in the rocky ground, no doubt seeding itself over the years since last grown here. One certainly had the feeling of walking through an abandoned subsistence landscape.

I was slowly gaining height on the slopes of the prominent Mt. Arena with views back to scattered Lajares and yesterday’s volcano walk. At the pass I came across my first trail shelter built to provide the GR walker with wind and sun protection in this harsh landscape. Up here the lava has a green lichenous covering which in the past was collected for dye production.

Back to Lajares and volcanoes. 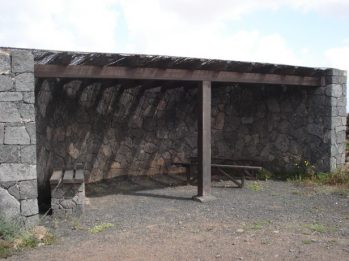 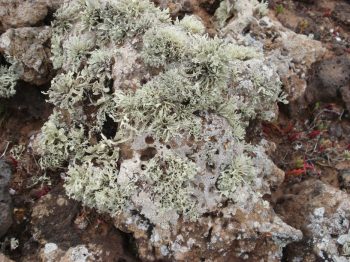 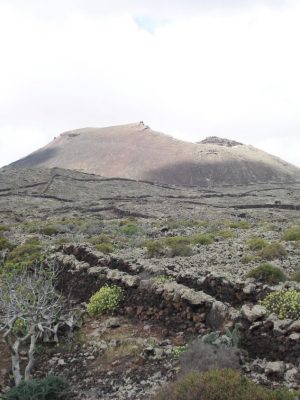 From here La Oliva was spotted down in the valley whilst more volcanic ranges stretched out to the south.  A Chiffchaff caught my attention high in an Agave plant. On a hill ahead were two prominent windmills used previously for grinding grain. As I descended the usual collection of put together buildings with associated yapping dogs were passed, there only purpose seemingly a few goats or hens. La Oliva itself has a smart central square with its church and muscular tower.

La Olivia with M Muda behind and the shapely Tindaya to the right. 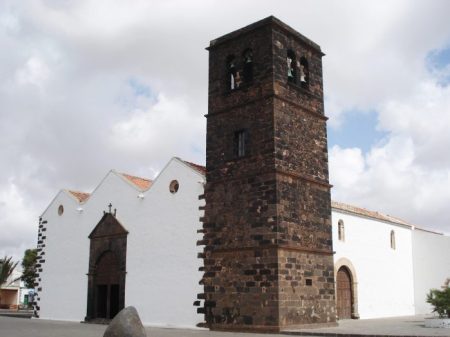 There are shops and bars and importantly a bus back to Corralejo for a late lunch and a swim. These short days are suiting me.