Another change of personnel today,  JD joined Peter and I on a windy morning. The highlight of the day was crossing the Lune Aqueduct on the edge of Lancaster. The walk from the pedestrian bridge [103] in town was through the rather dull suburbs but by the time we reached the aqueduct open countryside was visible, or at least a golf course.

Rennie’s aqueduct opened in 1797, after 5years construction, to much acclaim. There are five arches scanning 70ft 50ft above the Lune. Recently there has been a significant refurbishment with improvements to the lining and the stonework. We should have descended the steps to view the structure from the river bank. Instead  we strolled over the exposed towpath made safer by the ornate balustrade. Lancaster castle was glimpsed downstream. Lunesdale upstream. 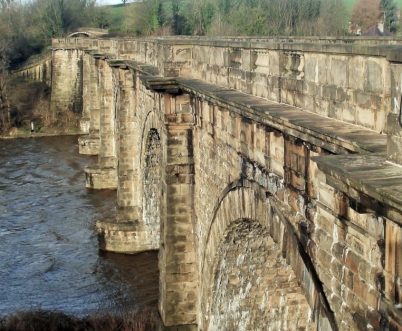 The next landmark was the new ‘milestone’ bridge carrying the M6 relief road to Morecambe.

This was a massive structure compared to the usual arched stone bridges. One of the latter in the vicinity has been widened more sympathetically to accommodate the road, a date of 1921 is visible. 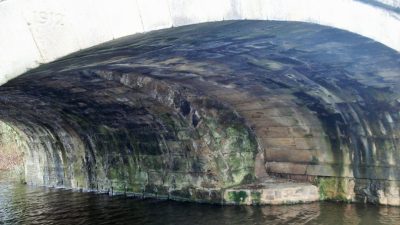 Along side the canal every 6-7 miles or so were stables for the fleet of horses enabling the ‘fast’ passenger boat from Preston to Kendal, done in 8 – 9 hours. The masonry remains of one is next the towpath, easily missed. 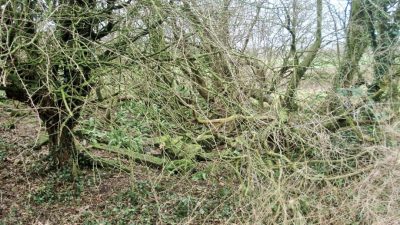 Through Hest Bank and Bolton-Le-sands we seemed to hover drone-like above the houses with views across Morecambe Bay. At one time ships would harbour on the Morecambe Bay coast here with goods to be transferred up to the canal, the opening of the Glasson Dock branch in 1826 superseded this.

Somewhere between the two villages is a good example of a swing bridge, now leading to private houses. We contemplated on how it would be interesting to withdraw access to unwanted visitors by a swing of this bridge.

I was on the lookout for old coke ovens at two sites into Carnforth, bridges 125 and 127, but disappointed with the outcome. No real sign of the beehive structures across the other bank, the low sun making visibility difficult. The ovens were used to produce better firing smokeless fuel for blacksmiths and bakers and later for iron smelting. They are supposed to look like this,,

The basin to the south of Carnforth was busy with boats and dog walkers but before we knew it we were back in a rural setting before the children’s playground announced bridge 128 on the Kellet road. Time to find a bus back. 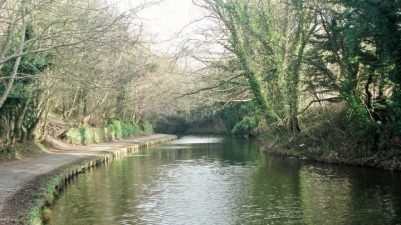 Corniest boat name of the day…