There’s a new trail being developed up the coast north of Inverness, partly to keep ‘end to enders’ off the maniacal A9. This venture also hopes to highlight the magnifcent scenery in NE Scotland.

In some ways the route consists of two halves. The southern week’s walking is mainly flattish along the shoreline whereas the second  half north of Helmsdale is rugged walking over high cliffs.

The next few posts are of the first half from Inverness. 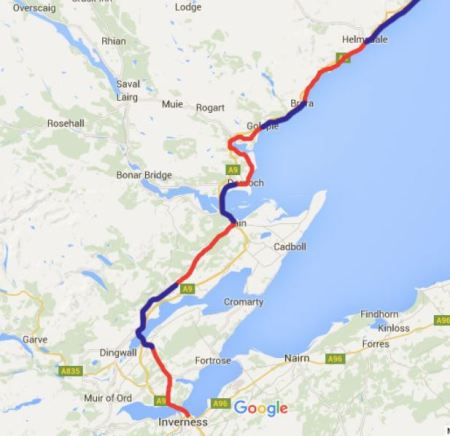 The beginning of how to avoid the A9.  Inverness to North Kessock.

As part of my ongoing Lands End to John O’Groats exploits another week was looming. We are having such hot weather down here i thought Scotland could give some relief. A few weeks ago JD and I filled the gap in the Scottish Lowlands leaving me only a section north from Inverness. I had heard horror stories of people walking on the A9 and was determined to avoid it if at all possible. A little eleventh hour research came up with the John O’Groats Trail, a coastal route from Inverness.  Before I knew it, most of my trips are last-minute decisions, I was stepping off the train in Inverness. I was not impressed by the city – too many tourists, too many drunks and beggars, too many cheap high street shops. I was therefore glad I had booked a B and B across the river for the first night, this gave me an easy 4 miles evening walk to help me on the way and escape the city. I didn’t even stop for a coffee.

The official start of the trail is outside the castle where there is a fine statue of the Jacobite heroine Flora MacDonald, the one of Bonnie Prince Charlie fame. I did find a waymark for the JO’G Trail. Pleasant walking initially alongside the River Ness led into industrial estates where the only building of interest was Cromwell’s Tower – this is all that remains of a great fort here completed in 1682, It seemed incongruous in the industrial setting.

Once alongside the Beauly Firth the massive Kessock Bridge carrying the A9 made itself present. A scramble up the banking onto the pathway felt illegal. The way across was scary up close to thundering traffic which seemed to be ignoring the 50mph limit. It was a long way down to the water and my search for dolphins was futile. 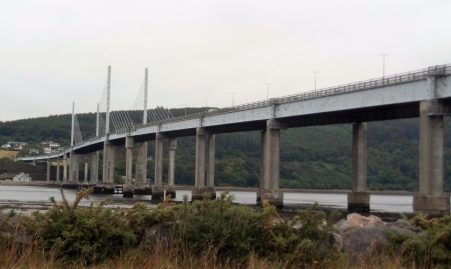 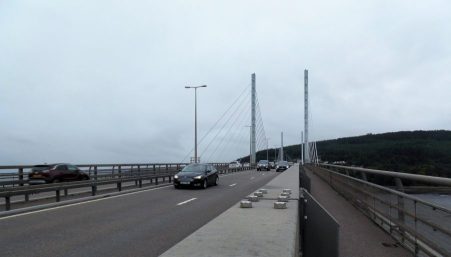 Thankfully off onto quieter lanes at the far side life became tranquil once more. My B and B on this north side was a haven of peace overlooking the Beauly Firth. I slept well anticipating some interesting explorative walking. 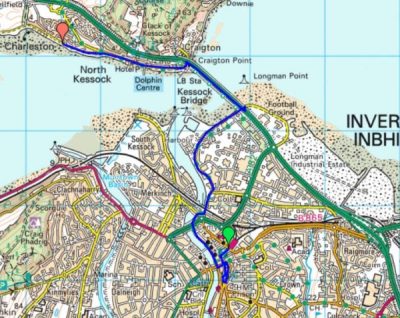