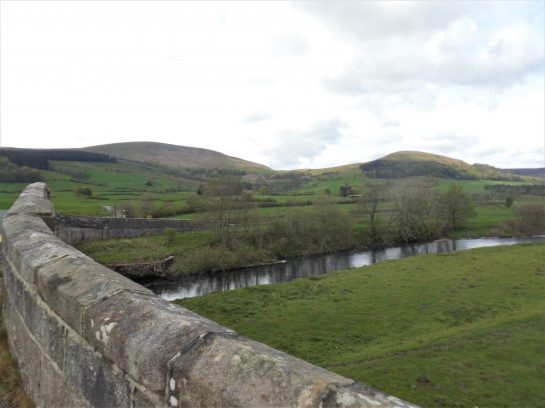 Totridge Fell and Mellor Knoll from Burholme Bridge at the start of the walk.

Mellor Knoll is a 344m lump in Bowland, I didn’t actually climb it but I came close.

I was in my dormouse mode this morning and stayed in bed with my second coffee looking at maps whilst the day warmed up. Eventually I stirred and drove out to park at Burholme Bridge on the River Hodder. Early morning cyclists were already returning from their Trough of Bowland circuit, a popular ride with Lancashire cyclists: one of the most prominent I met later in the day. I last cycled it 5 years ago.

A quiet lane leads up into the limestone area of Bowland with its Reef Knolls and caves.  A footpath brought me onto the farm track to Whitmore, a lonely farm at the base of Totridge Fell. In the past there were free range hens wandering about although today the scattered wooden hen-houses looked deserted. 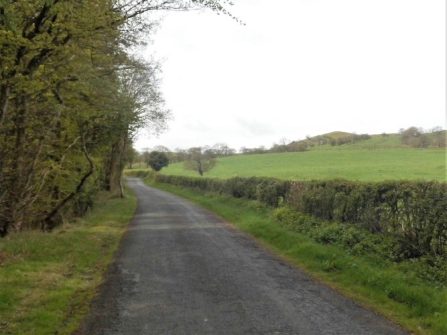 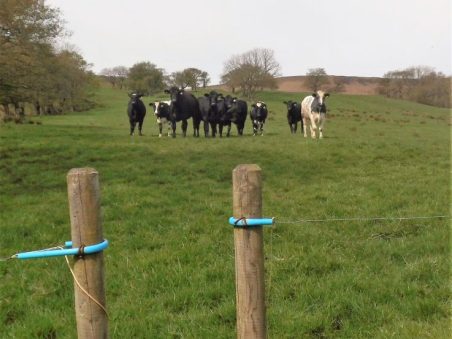 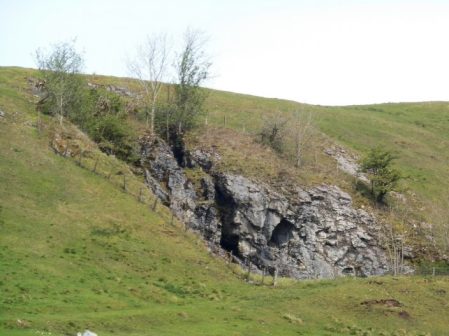 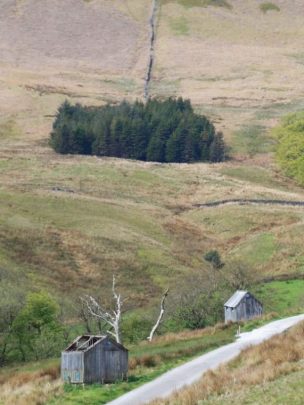 A bridleway takes off towards the woods on a track that was always muddy but tree felling has opened up the landscape and things are improved. This bridleway cuts through between the cone of Mellor Knoll and the parent fell of Totridge. Contouring the hillside was a joy with bluebells and fresh green beech leaves; views down to the snaking Hodder and the little known Birkett Fell, Waddington Fell and distant Pendle; towering above me was Totridge Fell with stone walls going straight up the steep slopes. 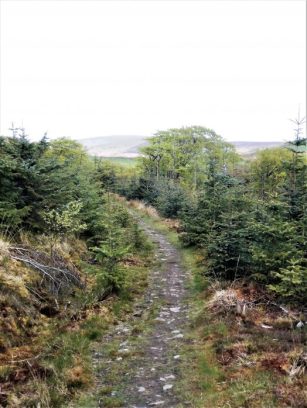 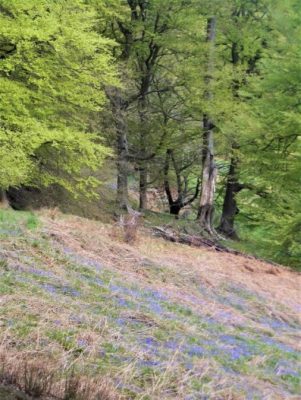 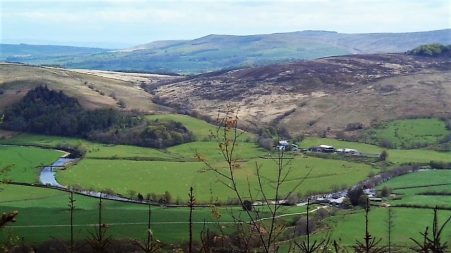 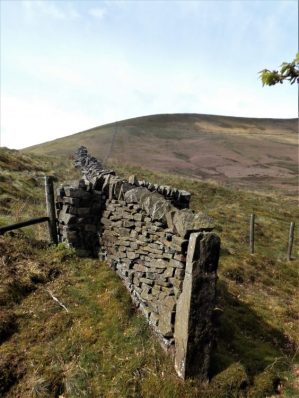 With all this excitement I wandered off course at the col and was heading the wrong way into Hareden Valley, it wouldn’t have mattered on this open ground but I traversed back to the correct track. Up here the hardy sheep only seem to have one lamb as opposed to their lowland softies with twins and triplets. 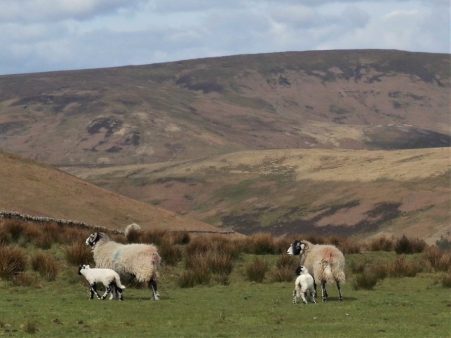 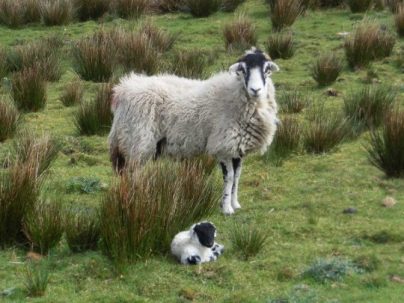 Oh and this is how to mend a wall… 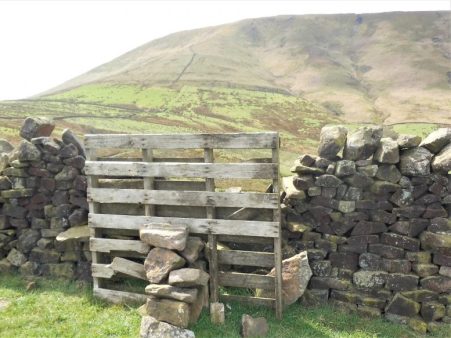 I was now looking down on the farms of Hareden with the Trough of Bowland in the background. The hounds at the farm always give you a greeting long before you arrive. 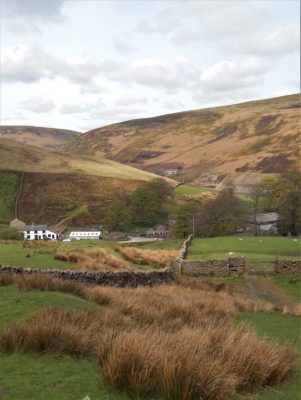 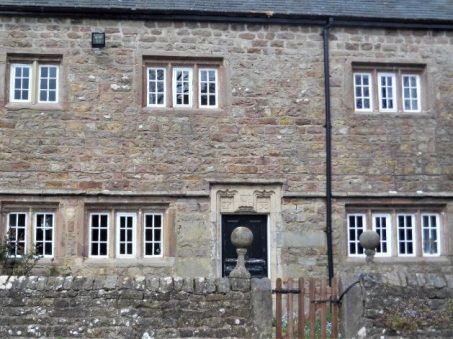 Crossing Hareden Brook [dippers seen] and then Langden Brook brought me onto a short stretch of The Trough of Bowland road. 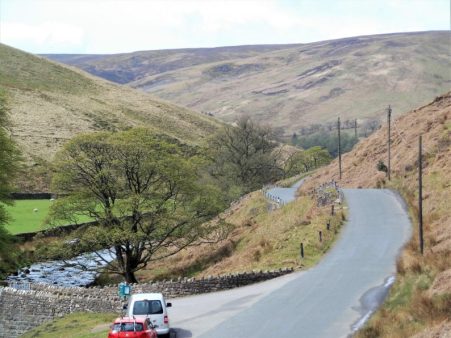 Looking up the ‘Trough’ road.

I followed this for a short way before I could continue across fields to the water board road following the River Dunsop past cottages to the hamlet. 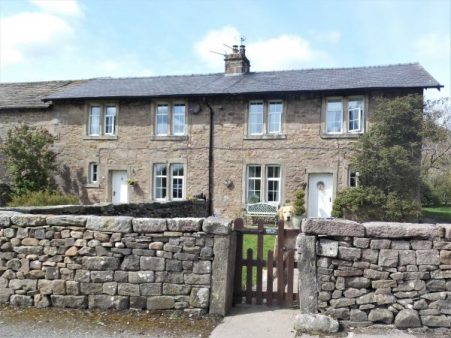 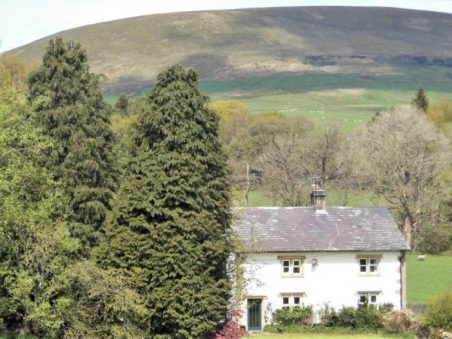 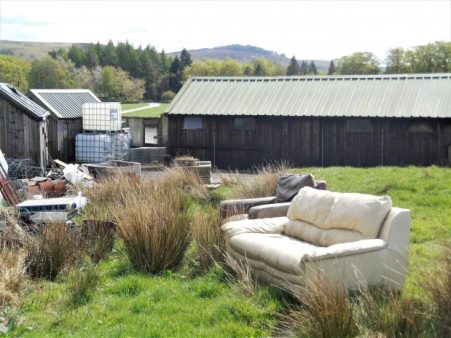 I’m sure these weren’t designed for outdoor seating. 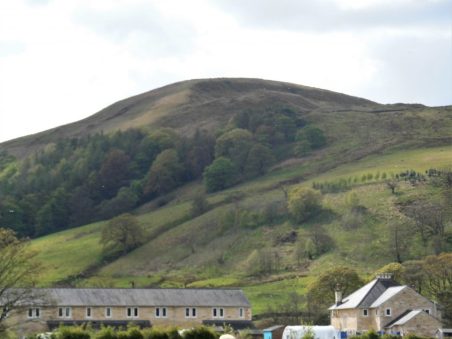 Mellor Knoll above the new houses in Dunsop Bridge.

This is a popular walking area and lots of families were out enjoying the sunny weather and the delights of Dunsop Bridge hamlet – often cited as the geographic centre of Great Britain, although different measurements give different results. I passed the BT phone box which celebrates this fact. 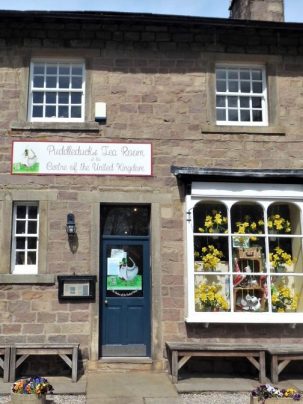 A line of tall pines leads to Thornyholme Hall and farm over a bridge on the Hodder. 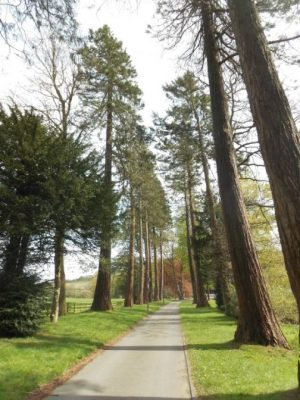 The last time I passed here in 2013 a chain saw artist was just beginning rendering a stump into a statue of the thinking man and the results were seen today. 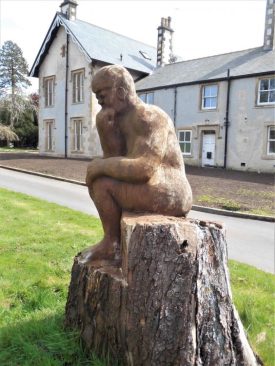 There is a lovely stretch along the River Hodder, ducks and their ducklings were swimming by the bridge and further on I watched sandmartins going back and forth to their holes in a sand bank. If you click and enlarge the photo I actually caught some of them in flight and at the nest entrances. 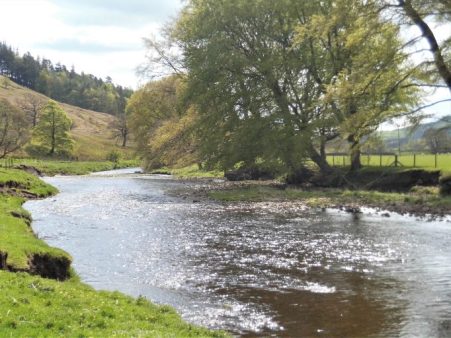 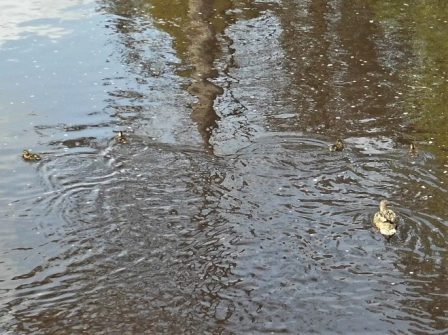 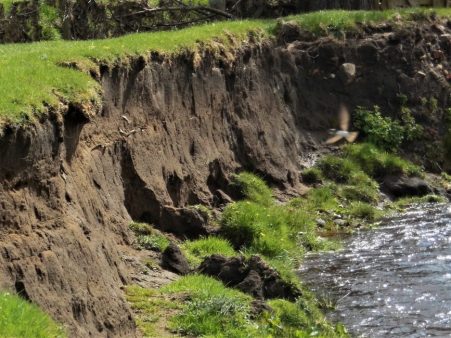 It was on this stretch I met an elderly couple walking towards me on a short river ramble, some how the conversation turned to cycling and it transpired that the 80yr old gent was Dave Brown. He had been a prominent racing cyclist with impressive time trial results over all distances, only retiring after he had passed 70yrs. https://www.lancashiretelegraph.co.uk/sport/3829912.east-lancashire-cyclist-retires-after-53-years/  He told me he had written a weekly cycling column in the Lancashire Telegraph for 40 years until they recently decide to scrap it!  We swapped tales of cycling in the past, what a lovely chance encounter. 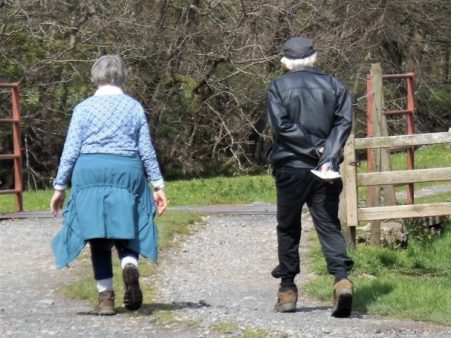 Soon I was back at Burholme Bridge having completed an interesting, if modest, 7 mile circuit feeling privileged to be living within this beautiful Bowland area. 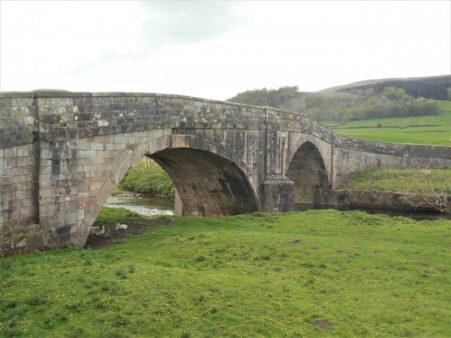 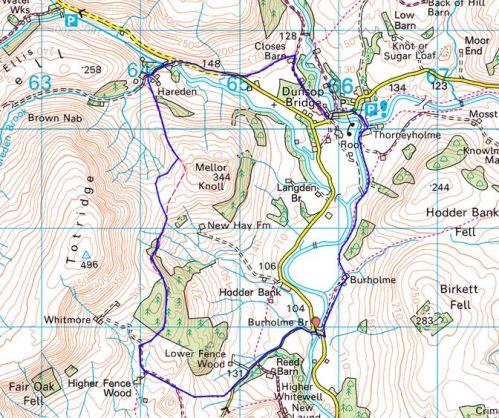 2 thoughts on “MELLOR KNOLL AND THE HODDER.”