Longridge Fell from the south, Kemple End is the steep bit at the right.

The fell in question is Longridge Fell, may I remind you it is the most southerly named ‘fell’. It rises to all of 350m and is a 6 miles long escarpment with a steep northern side and a gentler southern slope. The town of Longridge sits at its western end. My recent, infrequent, walks have been at the western end so today I explore the eastern end above Hurst Green where it drops steeply to the River Hodder. I have a particular path I want to explore.

I start in Hurst Green near the Shireburn Almshouses, they were first built in a commanding position on Longridge Fell itself in 1906 but were moved and rebuilt in Hurst Green in 1946 for Stonyhurst College workers.

I set off on one of my favourite paths that goes alongside Dean Brook which has found its way down from the fell and here is in a little gorge where it was harnessed to provide bobbin mills with power. Today, after last night’s rain it was flowing energetically through its twists and turns. Alongside is Sand Rock an old quarry which I diverted to see. I have climbed here in the past but it tends to be damp and green. There is a good view of the bridge from up here.

The lane leads on past Greengore …

… an old hunting lodge, and heads gently up towards Longridge Fell which on this slope is covered extensively with forestation. At the road I go left to pick up the forest track going higher onto the fell. It was near here that a fire broke out recently due to those dangerous disposable barbeques and their idiotic owners.

A sidetrack leads up onto the ridge where you pass through a wall stile to sudden extensive views; Chipping Vale to the Bowland Fells, Beacon Fell and the Fylde coast leading to Morecambe Bay and distant Black Coombe. A short boggy walk by the wall brings you to the summit Trig point, Spire Hill. There are usually a few people wandering around up here. Now out northeast are the three Yorkshire Peaks. 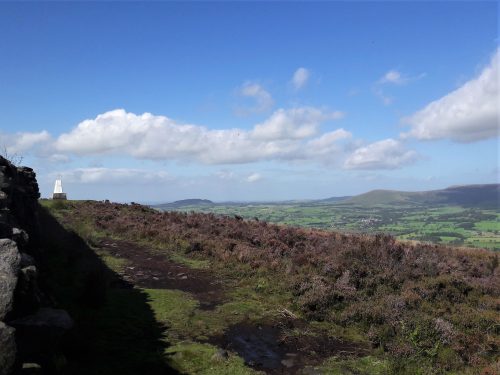 Heading eastwards I soon enter the dark forests where paths remain wet throughout the year. Further, on Hare Hill, is an area of older Scots pines I call the enchanted forest, where paths seem to disappear amongst the shapely trees draped in moss. I’ve bivied up in this spot several times, magic evenings with owls hooting and deer wandering by. 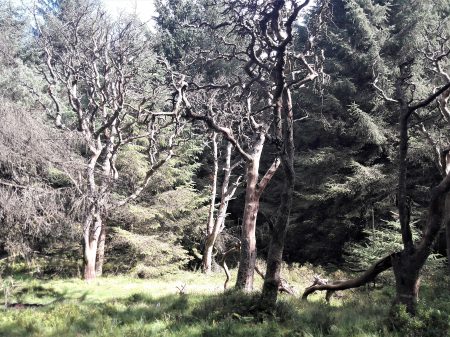 I emerge onto a forest track which leads to an open area with views this time into the heart of the Trough of Bowland whilst way down below are scattered farmsteads. There are some logs to rest awhile. 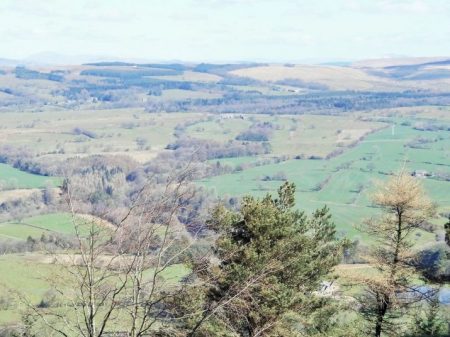 In the sunshine butterflies, mainly Red Admirals, flit about the purple heather which is just coming to its prime.

Onwards is a much smaller path in the trees on the edge of the steep northern scarp, the land just drops away from you. When I first explored these forests 50 years ago there were no paths at all, but over time this one has become established and now appears as a dotted line on the 1:25,000. In recent years with the advent of mountain bikes, a lot of tracks have become badly eroded – my feet are certainly wet by now.

As this narrow track, now hemmed in by young spruce trees, starts to drop down the fell end I’m on the lookout for that public footpath I want to explore. It drops down back NWesterly on an old rake. At one time this was through mature trees but these were felled a few years ago, I’ve not used it since. There is little sign of it amongst the new growth and I have to take a GPS reading to determine where it starts, there are vague traces of it so I build a stone cairn to mark the spot.

As I go downhill the now reedy rake becomes more discernable but difficult to walk on. It needs more traffic but most don’t know of its existence so I’ll report it in the hope of some maintenance by the forestry people, they should have reinstated it soon after their felling operations. 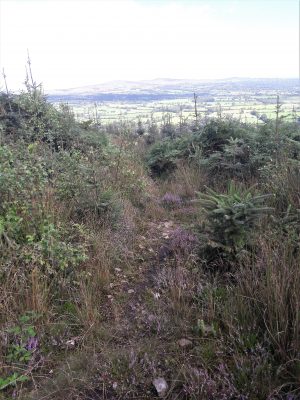 Coming down to the forest edge a stile allows me to walk along an old sunken, and boggy, track. There is a bench here remembering a Liverpool hiker. I stop for a snack looking out over the peaceful Chaigley countryside with old friends Waddington Fell and Pendle in the haze. I imagine how the man must have enjoyed his trips to this part of the country escaping the urbanity of his home city. 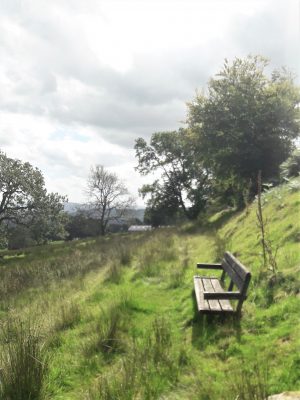 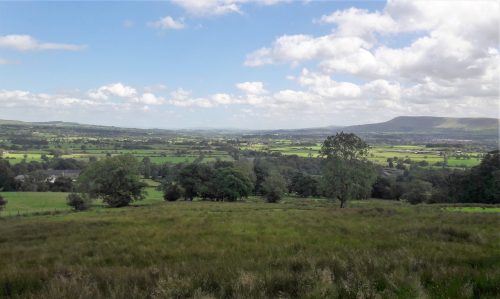 Sir Hugh will be pleased to read that my next destination after Turner Fold was Kemple End. 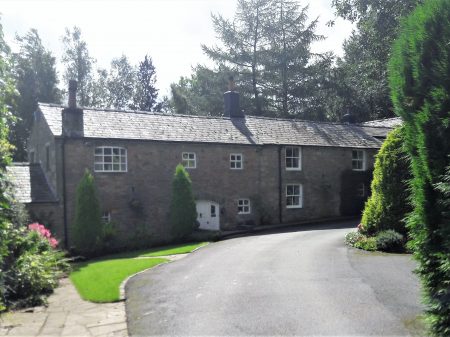 Here I wander past the cottages to reach a path going down the fell. This path follows the line of an old sledge way used for taking stone down from the quarries here to Hurst Green for the construction of the Shireburn family’s great hall which became Stonyhurst College. On a whim I decide to take an unknown, to me, footpath leading more directly down the fields. I come out by a delightful farmhouse, Throstle Nest, tucked away from society. The owner is strimming his verges, I stop for a chat and to compliment him on his residence. I’m the first person he’s seen on the path for months. He laughs that last weekend he travelled to the Dales to climb Great Whernside but the car parks were packed and the Covid hordes all over the hills. He won’t be leaving his Lancashire haven again during the viral pandemic. Of course, we then get to pontificating on when and how it will end so I forget to take a picture of his house but his view is good.

The public footpath goes through an unusual squeeze wall and straight across the front of the Stonyhurst College giving up-close views of the architecture and a vista of the ponds and straight drive in the reverse direction. 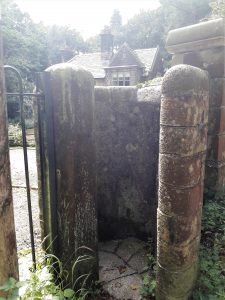 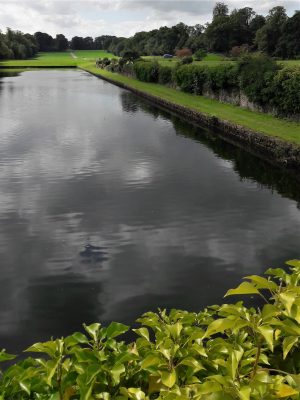 By the church which is unfortunately closed, I have my next ‘virus’ conversation with a mother and daughter. The daughter is reading philosophy and French at Oxford and is due to start her year abroad in Nantes. The uncertainty of the pandemic is giving her a few extra worries. 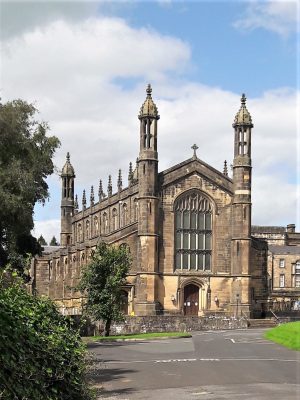 As there was nobody around I took the opportunity to have a look at the old mill restoration. It dates back to 1840 when it was powered by water from the ponds for flour milling. Later in the C19th a steam engine was installed. Last time I passed it was falling into disrepair but has since been fully restored to function as a retreat centre. Apparently there are remains of a fives court which I missed.

The field paths back to Hurst Green are busy as I’m now on part of the Tolkien Trail. It is conveniently thought that J R R Tolkien, whilst staying at the college where his son was a pupil, may have used the local countryside as inspiration for his popular Lord of the Rings. You enter into the village past some pretty cottages,

I have enjoyed this splendid outing showing some of the best scenery in this part of Lancashire and have gone into more detail than usual in the hope that some of you will be tempted to visit but maybe keeping to the well worn tracks.

Another version of this walk in reverse and including a bit of the Hodder is here. 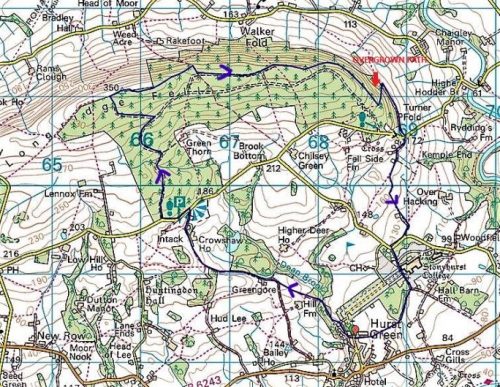 9 thoughts on “THE OTHER END OF THE FELL.”