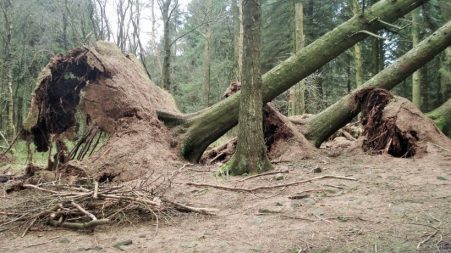 I’m busy today but need a bit of exercise whilst the sun is shining. Beacon Fell is an obvious local choice so I skip lunch and drive up. I park in the free eastern quarry. There are a few dog walkers around the pond. I feel a little disorientated at a path junction where I expected to see the ‘Black Tiger’ sculpture, is it being repaired? Anyhow onwards past lots of storm damaged trees. I check out the ‘The Walking Snake’, I’d heard it was rotting and found there was little left. The same with the nearby ‘Upside Down Bird’, only part intact. Nothing lasts for ever.

Remains of the Snake.

I went into the cafe/info centre and asked the delightful volunteer lady what was happening to the sculptures. “Never mind the sculptures have you seen what has happened to the trees?”   I mentioned a few storm damaged seen as I had walked over. “The whole forest was devastated in the arctic storm we had a couple of weeks ago”  Yes it was a wild few days I replied, were you up here then?  “No I was in Lanzarote”  That was another story.  Apparently the tall trees experienced a ferocious wind from the east, not the usual, and with the thin soil hundreds were blown down or literally snapped. There has been a large cleaning up process to safely open up the pathways.There will be an even bigger replanting exercise.   Click to read… 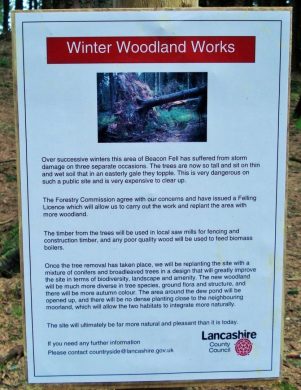 Getting back to the sculptures she told me the Black Tiger had been stolen!!!

The others were rotting and may be replaced, funds permitting. The head of the snake was languishing in the display room.

Apparently the new fad of embedding copper coins into wooden structures hastens their demise. So new sculptures will be higher out of reach of vandals, though not necessarily thieves. She mentioned some new installations for me to find, and off I went.

I took the long circuit round to the west and eventually arrived at the ‘Crocodile’ which may be a lizard and found that the tail has gone so perhaps the coins are causing damage.

Back up to the dew pond to admire the new Kingfisher beautifully carved to show the grain of the wood. Nearby I found a Frog. 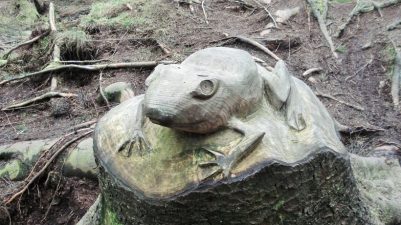 I next went up to the summit for views of the Bowland Fells and Morecambe Bay. Just below the summit is an Owl carving that I’m not particularly fond of, too sterile and more like plastic than wood. There were lots of children on a school educational trip nearby and when I took out my camera general panic ensued with the teachers ordering the children out of the way. I felt embarrassed that I had unwittingly flouted their child protection procedures. I took a quick picture of the average owl and slunk off into the trees feeling chastised and wondering what is happening to our world.

Not a child in sight.

I couldn’t find any other new installations so it gave me an excuse to return to the information desk for more precise directions. The Woodpecker and the Dragon Fly were up in trees so I hadn’t been observant enough.

“Remember to look up at the stars and not down at your feet”.  An appropriate quote from Stephen Hawking who passed away on 14th March, 2018.

With that in mind I soon found the Woodpecker and the Dragonfly. 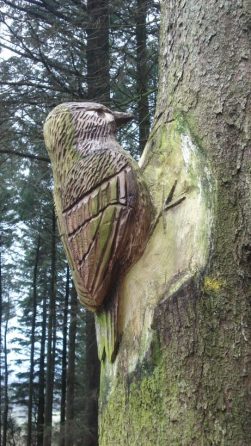 Walking back to the carpark I was amazed at the damage inflicted by those arctic winds. Could have done with some of those trees for my wood burner. 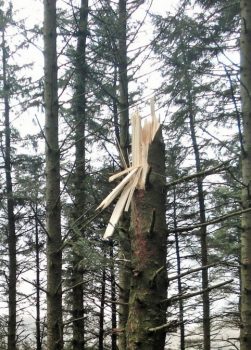 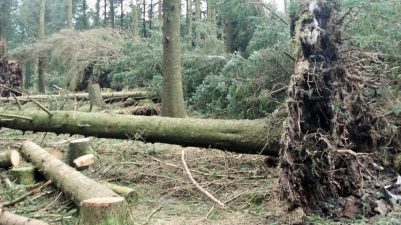 It was encouraging today to see the number of school children out and about exercising and learning something about our glorious countryside. I don’t particularly want to sour this post with grumbles about litter but there was lots of evidence that those children, here on environmental learning courses, had not learnt about taking their litter home.  Teach them about this as well as the geology and trees. I came back to the car with pockets full of rubbish. 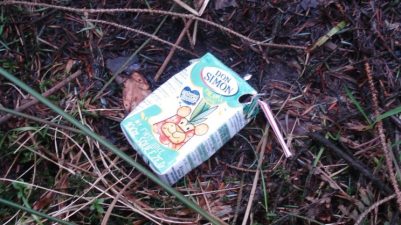 4 thoughts on “What is happening up on Beacon Fell ?”