My train was full of lively pre-match Blackburn supporters. Most didn’t have tickets and exited the station somehow, I was glad I wouldn’t be on their train after the match. AW was a lifelong Rovers supporter.

Outside the station, as I gathered my bearings I was struck by the number of expensive-looking cars, with modified exhausts and booming stereos, cruising around aimlessly at high speeds. I refrain from comment.

I began the long walk up Audley Range. Mills at the lower end near the canal have gone and been replaced by budget shopping units. From the canal upwards AW would have had almost a mile of two-up, two-down terraced housing. There has been demolition in parts giving little cul-de-sac estates. a mosque and many Asian shops but the higher you get the more you are attuned into AW’s time when he trudged up and down from the centre to number 331, his birthplace and where he lived until 1931 when he married. Until 1935 a tram ran halfway up before going to Queen’s Park. 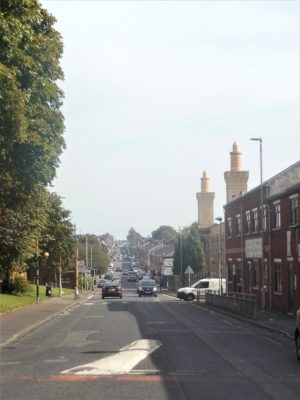 I couldn’t resist calling in at one of the little Asian ‘Sweet Shops’ to buy a couple of samosas for my lunch.

Fittingly there is a plaque on 331 to commemorate Wainwright though I wonder whether any of the Asian population hereabouts will realise the significance. Opposite his house is an open space formerly a brickworks producing the millions of bricks for the housing and mills. 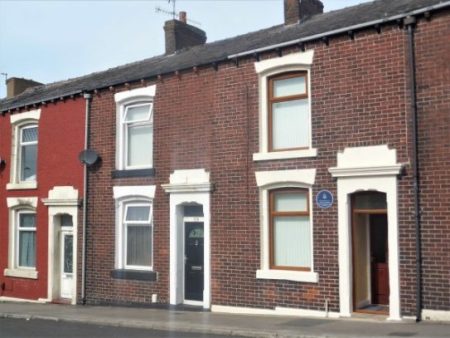 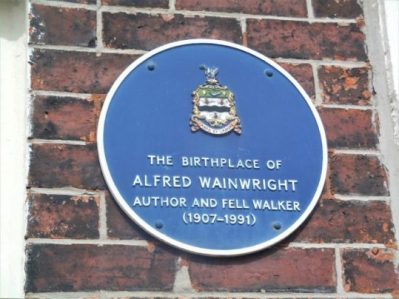 I reached busy roads on the edge of town. Up here AW attended primary schools, now demolished under ring roads and Tescos. 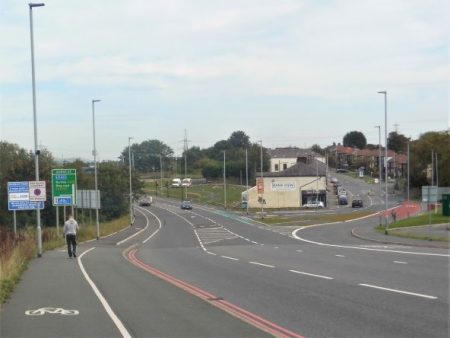 I was glad to turn down to the Leeds – Liverpool Canal at Gorse Bridge. The canal would have been lined by warehouses and mills and here is one of the last, the derelict Imperial Mill once employing 300 until closing eventually in 1958. Many of the mills diversified into minor industries after cotton had crashed.

The canalside walk took me past the Whitebirk Estate, shops and car salerooms, and under the maize of roads connecting with the motorway system. One always sees things differently from a canal and then the next time I drive around these roads I’ll reminisce to myself and try and spot the canal. I ate my samosas as I walked the towpath and realised they had quite a kick to them. 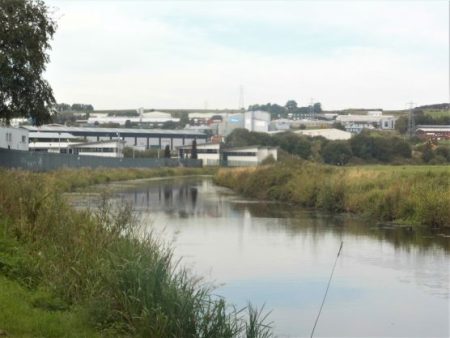 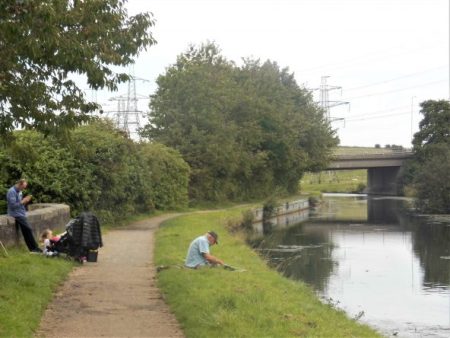 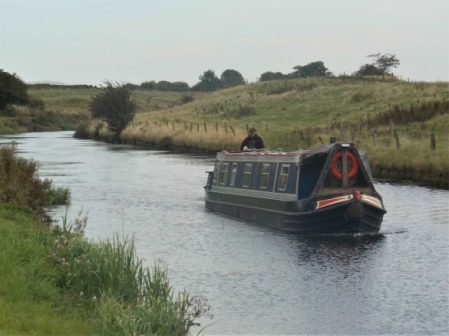 Before long I was in a more rural landscape and leaving the canal to climb steeply up onto the ridge of Harwood Moor. An old bridge is crossed, this is the line of the former Blackburn to Padiham railway. The industrial landscape is left behind and suddenly you have a view of Longridge Fell, the Bowland Hills, Yorkshire peaks and Pendle. It was these northern edges of Blackburn that AW  explored as a youngster and subsequently with work colleagues. A certain Harry Green wrote a regular walking column in the newspaper and produced some guidebooks to the area and into the Ribble Valley and Longridge Fell.  One of AW’s walking companions, Lawrence Wolstenholme, kept a diary of Harry Green inspired walks and his descendants still have a copy of Rambles by Highway, Lane and Field Path. H Green 1920. So it is certain that they walked these trails out of Blackburn.

I entered a farmyard patrolled by a bull and hesitated before rushing to the other side and safety. All the fields up here seemed to contain frisky bullocks so I did a little creative road walking to get me on my way. I was soon on a higher ridge with even more extensive views.

Looking back to Blackburn.

Down a reedy path to the Dean Clough Reservoirs with Pendle in the background and then I make my own way up above them to come out onto Moor Lane above Langho, it was only last week that I visited The  Lord Nelson Inn here for lunch. Its a very basic but friendly pub with good beer and a limited home-cooked menu,  a couple came in and asked about dining “have you a gluten-free option?”   “No!” was the simple answer.

I didn’t have time today to call in for a pint but marched off along the virtually traffic-free Moor Lane. 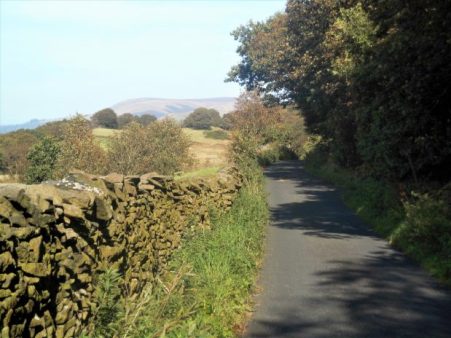 At one point I glimpsed a deer eyeing me through the trees.

Whalley Nab is at the end of the lane directly above Whalley and the River Calder. The River Calder flows through Whalley to join the Ribble, leaving behind its industrial hinterland where in the distance can be seen the Martholme Viaduct which carried the aforementioned Blackburn to Padiham railway.

I had a birds-eye view of the Ribble Valley and Whalley, making out the street plan and the more famous railway viaduct over the Clitheroe – Blackburn line I travelled this morning. The Ribble Valley was one of AW’s many sketchbooks done in later life, Nick Burton has illustrated his text with some of these sketches.  It will be interesting to compare AW’s views with my own as I proceed.

Before I knew it I was crossing the Calder into the busy main street. The impressive 13thC church was closed. Whilst waiting for my bus I had a very short time to look round the Abbey ruins, free entry today – Heritage Week or something. They deserve more so I’ll return for a longer visit. 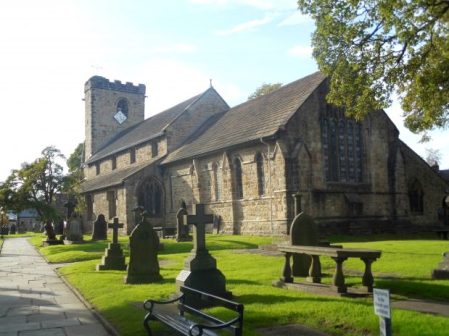 I’ve finished the first stage of Wainwright’s Way and I’m looking forward to the rural walking to come.